The Hotel Alfonso I is a good hotel. The manager, Esther, has walked the camino and keeps photos of her pilgrims. She is a consummate professional.

It is off Camino, so I had to improvise our route to get back onto it. We had been told about accidents along The Way involving pilgrims, so I used my discretion. After a few kilometres of the main N550, I chose my own option of walking through a business park. Not pretty but wide sidewalks. No dodging the traffic.

As we entered O Porriño at around 9:00am, we saw the trains passing by at high speed. Our route followed the railway line. Just a few minutes later, we heard the sirens as the emergency services sprang to life. The sky filled with yellow helicopters. A tragedy was unfolding. We were close to it, and the gathering crowds and ambulances showed the tragedy was on the train line. A train had derailed at high speed. There were clearly injured people walking and – as we later found out – some dead.

The police reacted well. Helicopters were landing on the road and traffic was being diverted. We were allowed through but shown the route we must take. Traffic ground to a halt.

A few kilometres further on we met a father and daughter from Barcelona. She was about to start teaching English, and was happy to practice her skills on a couple of native English speakers. We walked and talked together for a few kilometres before we needed to stop for lunch as we still had a long haul ahead as my plan was to eat paella (here in Galicia often called Arroz con Marisco).

We stopped at the Tapéria Flora in Mós. Good simple food, when served by someone as alive and as naughtily humourous as Flora, becomes great food. 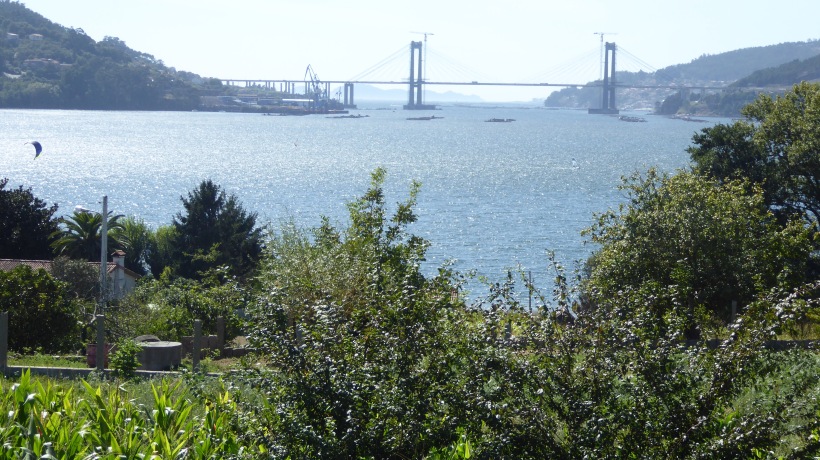 After an all too brief stop, we were back onto the long climb over the hill and it seemed to take ages to reach Redondela. Like so many Spanish towns, it has extremely average outskirts, guarding a gem of a centre. Here was where we had to briefly leave the yellow arrows as we had booked into the Hostal Santo Apostolo just north of Cesantes. 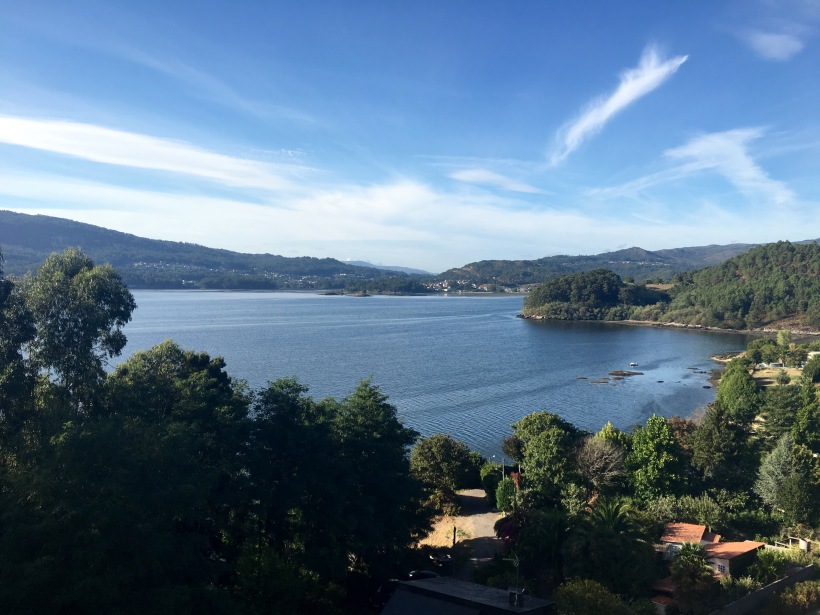 The room looked out over the beautiful sea inlet. It was like a Highland sea loch – only warmer. The staff are welcoming and the owner is Pepe who is a warm, ‘larger-than-life’ person.

The true highlight of the day was the restaurant and the food. Their ‘Arroz de Marisco’ (rice with seafood cannot begin to describe it) was heaven in a pan. My tastebuds will love me forever.

Pepe came to join us and in a mix of Spanish, Galego, Portuguese and English he told us the history of the area which he told us espouses Christopher Columbus and his ships (with different names in Galego compared to the Spanish names we learned in school), as well as the first kingdom of Europe. He had wanted to build a memorable restaurant with rooms rather than a hotel. He has succeeded.

We enjoyed a lot of local wine and local liqueurs as the talk flowed. A wonderful pilgrim experience that I can recommend to any who follow us.