“Today I shall be talking mostly about flowers…?”

Reasonably early start, although I suspect I caused Ana to be late. For those who may follow in my footsteps, I strongly recommend the first class hospitality offered by Ana. She is a both a lady and a great host. Look up Sacavém on Airbnb.

I started at 0830 and went to the local church where I hoped I could secure a stamp on my credençial. Alas – I arrived at the start of  the morning mass. The priest was otherwise engaged. I stayed for a while but I am not RC and knew none of the responses, even though I respect all faiths. (BTW – The reason I like the Caminos is simply that I respect the basis of St. James’ teachings – ie unconditional love and forgiveness. I should be so lucky as to manifest those virtues in my own life – but I try….)

Anyway – the urbanised part of this Camino ended – at least for a few kilometres  – as I left Sacavém.  The Way left the road and followed the banks of a small river set in a steep  sided valley. I was in line with the runways at the airport for much of the next few kilometres and the shadows of the planes were the only shadows cast by a cloudless sky..

The temperature rose throughout the morning. At Granja, my first village and 15km into the day, I stopped at a snack-bar for a coffee and there I met my first pilgrims on this Camino. In view of the fact only 5% of Santiago arrivals start from Lisbon, and less than 7% of all pilgrims are British, what were the odds of meeting a couple from Yorkshire…? The Carrolls are a lovely retired couple whom I was happy to meet and we all shared sticks to cross a muddy little stream. I doubt I shall meet them again as their goal for the day was before mine – but who knows…?

The route I followed went through wetlands along the Rio Tejo by a new, elevated walkway. The early afternoon grew hotter and hotter and I was glad to reach Alverca where the Camino takes pilgrims though the railway station using its bridge to cross the railway as it has got over 1,000 years. I stopped to eat drink and rest as I still had 10km to go. Great caneca of Sagres beer ( ask for an ‘imperial’ for draught beer). 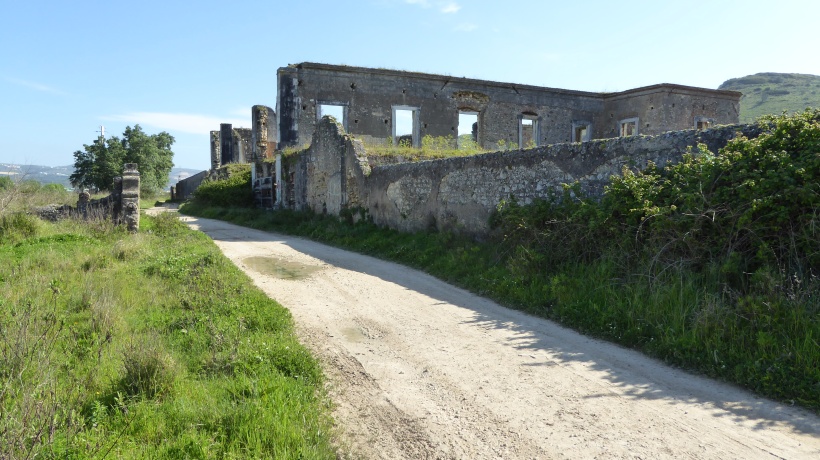 The Daisies – so many varieties; Borage; Lilies; Vetches; Mesembryanthemums; Bougainvillia – and so many more that I cannot name. Lemons dripping from trees. If I were a botanist, this would be a Gatden of Eden.

The birds too. Swallows and Swifts almost dive bombing me as they chased the airborne insects.

The route from Alverca to Villafranca is along a main ‘national’ road which is very narrow in parts. I was passed very close by trucks and cars at high speed. Not pleasant.The road services the towns along the Rio Tejo which are semi-industrial with many sad industrial ruins along the way

As soon as the chance came, I left her road and followed the river into Villafranca de Xira (VFdX)

When I arrived at the place where I had booked a private room, I was to find they had overbooked. I was offered their last bed in a top bunk in a dormitory.  I am old and I get up in the night. I was not about to start worrying about how others felt – which I would have done – so I booked into another place. They can keep the money.

Although I am disappointed by my first host here, I shall not judge further. They felt bad about messing me about so that is enough.

VFdX is a nice little town. The first person I spoke to was a Scot,  busking his way through Spain and Portugal. Nice music.

I am going to enjoy my meal here tonight. I had a recommendation for a place and it did not disappoint.